The Providence police are investigating after a 42-year-old man was stabbed Monday night on Cranston Street.

It happened at 7:30 p.m. near Waverly Street, the police said.

At 7:30 p.m. tonight a 42 yr-old man was stabbed while he was walking on Cranston St near Waverly St. A friend drove him to Cromwell St. and called rescue. He was transported to RIH and is listed in stable condition. Police are investigating; no one has been apprehended.
TAV

Stabbed in the upper torso, the man was taken to Rhode Island Hospital, where he was listed in stable condition Tuesday morning.

Nobody has been arrested.

According to an initial police report, the police were flagged down at 55 Cromwell St. by a woman who said that the man riding in the back of her car had been stabbed near the Dunkin’ Donuts at 552 Cranston Street.

She told the police that she’d seen the victim arguing with another man before the other man pulled out a knife and stabbed him, the police said. The suspect fled, she said.

The woman told the man to get into her car and started driving to Rhode Island Hospital but stopped when she saw the police, according to the report. A Providence Fire Department ambulance responded and brought the victim to the hospital. 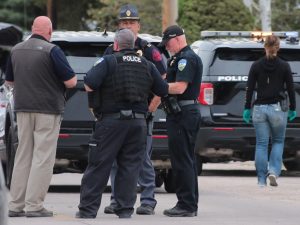